A Touch of Mack 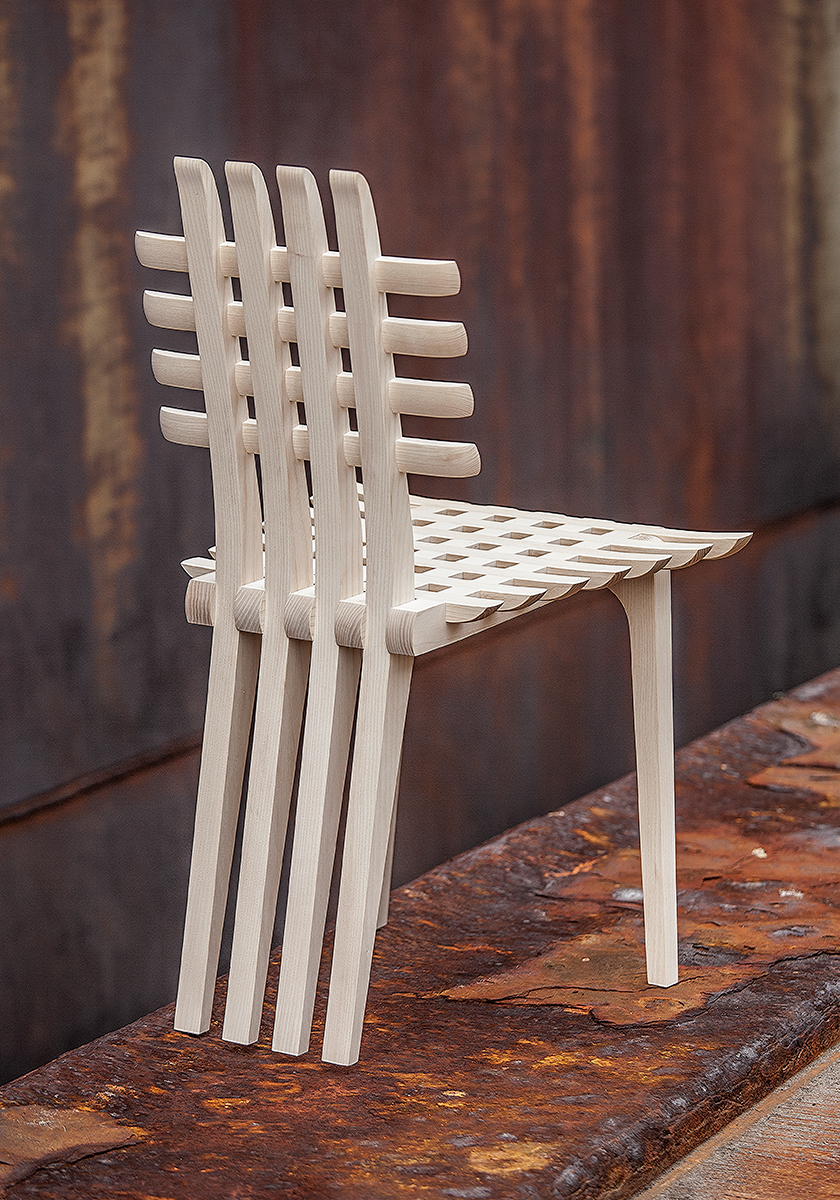 “A Touch of Mack” is an astounding chair made of Danish ash; made in a limited series of 20 numbered pieces.
Its construction is extremely complicated with a seat and back that seem to be woven, and it features four hind legs. The intricate chair is a formidable result of a beautiful collaborative process where ideas and knowledge about design, construction and craft deliberately have been combined and boundaries of furniture construction have been pushed. Architect Hannes Stephensen’s  original idea was to create a very intricate chair paying tribute to Scottish architect Charles Rennie Mackintosh who designed renowned pieces of furniture in the UK Arts & Crafts movement.
Hannes Stephensen presented the first sketches and ideas to Egeværk and then “the most important conversation” (H.S.) began – the conversation about uniting design and construction. Egeværk was immediately intrigued by the look of it, but also by its implied challenges construction–wise.
Egeværk managed to redeem the original vision of Stephensen by devoting their great skills and relentless attention to detail to the project. No short cuts allowed! E.g., Egeværk chose to use the very fair Danish ash for the chair. Ash was chosen for its beauty and very Nordic expression, despite being quite a challenge as the chair features many many joints literally requiring a 1/100 mm precision. The light wood would give Egeværk away if there was even the most microscopic gap.
Back to Hannes Stephensen and Egeværk’s shared loved of their material: when a “Touch of Mack” is constructed, it all begins with the selection of the exact right pieces of wood. The planks of light ash are first carefully cut so the grain of every piece is angled exactly right. Egeværk then dry the pieces of wood for months before beginning the construction of the chair – on top of the kiln in a glassblower’s workshop. Due to the many joints of “A Touch of Mack”, the wood has to be completely ready. Once the chair is constructed – a painstaking process – the tree soaks up soap, allowing for a protective but invisible shield leaving the natural beauty of the ash unaltered.
“A Touch of Mack” has been featured on PAD Genéve, PAD Paris, Design Miami/Basel, The Salon NY, The Royal Danish Embassy in London, Maison du Danemark, Paris, CHART, Charlottenborg Museum and Øregård Museum, both Denmark (selected).

“A Touch of Mack” is designed by Danish architect and designer Hannes Stephensen (1944) and crafted by furniture makers Egeværk (Mette Bentzen 1978 and Lasse Kristensen 1985).  Joint product development.
When Hannes Stephensen first approached furniture makers Egeværk with his initial sketches, the first response from Egeværk was: “Is it difficult? Because otherwise, we are not interested.”
Since then, the experienced architect and the ambitious young furniture making duo have proven to be a match made in heaven – kindred spirits basing every decision on a shared love of their material and a desire to create truly formidable pieces of furniture – or art.
Architect Hannes Stephensen grew up in the environment that fostered many of the most revered Danish design classics. Shaped by this intellectual as well as highly creative background, Hannes Stephensen chose to work as a self-taught carpenter at Denmarks most remote, and indeed very small island, Christiansø. Here, he explored wood as a material for several years before going on to study architecture in Aarhus. Hannes graduated from Aarhus School of Architecture in 1972, and his love of wood and craftmanship has since been instrumental for his oeuvre as a furniture designer and architect.
Award-winning furniture sensation Egeværk is all about refining their craft – and pushing the boundaries of it on a daily basis. Egeværk often uses the phrase “Exploring craft, creating art” to define what they do; Egeværk is definitely a far cry from your traditional furniture workshop. The high ambitions of Egeværk always seem to be more about the craft than about themselves, and the quality of their experimental pieces has opened the doors to the global arena of collectable design.
Lasse Kristensen and Mette Bentzen are both trained at the esteemed PP Furniture; a Danish joinery since 1953 famous for its large portfolio of modern Danish furniture. The years at PP Furniture made Mette Bentzen and Lasse Kristensen true experts in the renowned Wegner pieces. The certificates of completed apprenticeship were in both cases accompanied by silver medals (the highest Danish guild honour of a craftsman; as only God is eligible for gold).
Lasse Kristensen went on to win the Danish as well as the Nordic championship in cabinetmaking; later on, he even represented Denmark in the World Cup in Japan. Lasse is the receiver of the Mærsk grant and the Poul & Gurli Madsen’s grant. The grants were handed over by Her Majesty the Queen Margrethe II of Denmark, and helped Lasse with studies in Japan at Hinoki Kogei with Tadanori Tozawa.
Mette Bentzen chose cabinetmaking after studies at Copenhagen Art School, and left a successful career as a multi media designer for her apprenticeship at PP Furniture. It was a three year long round-the-world sail that drew her to the world of fine woodwork.